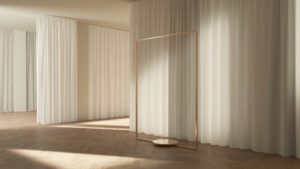 THE NEW LUXURY SPACE IN THE HEART OF BERLIN 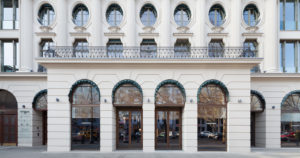 With a total space of 870 sqm, ALHAMBRA BERLIN is located on Kurfürstendamm 68 in the very heart of Berlin. The space offers the perfect canvas for leading and evolving brands.

The premises are a mixture of showroom, gallery, event space and store. Therefore the space is divided into different areas and levels, each of which allows potential brands to be staged individually. Its interior design fits into the complexity of the building with clarity and elegance. Common guiding principles here are the themes of innovation, individuality, quality and exclusivity. 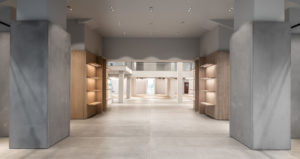 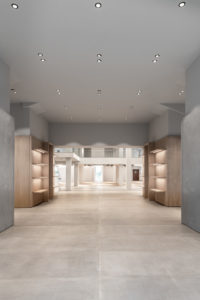 Four spatial identities were developed in which atmosphere, spatial proportion and various presentation themes create a coherent experience that can be intuitively experienced by customers. 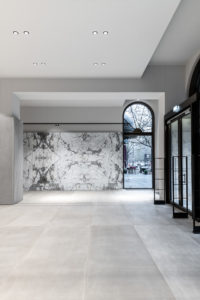 Expansiveness and intimacy, warmth and minimalism, contemporary design and historical allusion are as much part of the design repertoire for ALHAMBRA BERLIN as the creation of spatial and atmospheric magnets. 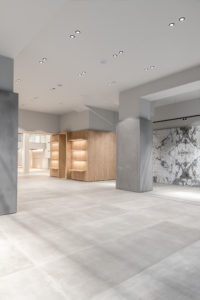 The first thing visitors enter inside is the large hall. This is where the first individual areas of flexible size and spatial configuration are located. 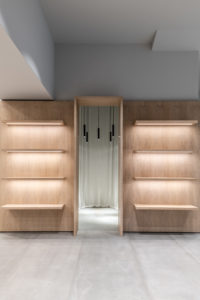 Attached to this is a special presentation room, which makes it possible to stage special designs in an outstanding manner. Wall paneling made of soaped oak wood meets custom-made shelves made of satin brass. 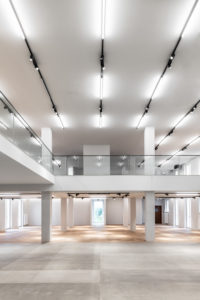 In the so-called salon, which is located in the area towards the back and conveys intimacy and tranquility thanks to its lower ceiling height, while room-dividing curtains create individual spaces with a pleasant atmosphere. 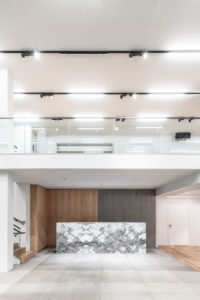 The checkout area with its precious marble cladding is perfectly located for use as a bar for events. 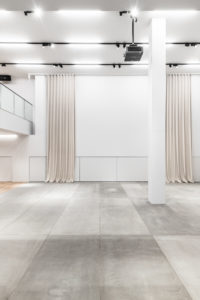 Floor-length curtains recall the site’s past, which is significant for the history of film. The forum offers space for exclusive events, video projections and emotional stagings of brands, products and partners. 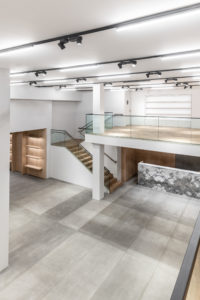 The design of the interior spaces is based on a select concept of materials. In keeping with the dynamic use of the rooms, the surfaces were deliberately kept minimalist and limited to a few high-quality materials. 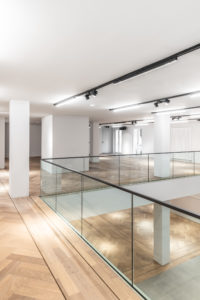 Another highlight is the gallery on the mezzanine floor, from which guests can enjoy the view into the space. 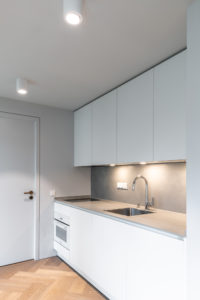 Of course, a staff kitchen and a back office with a view of the quiet back garden were also considered. 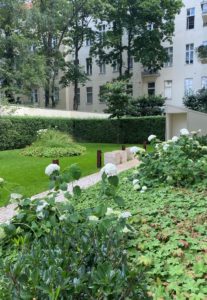 The garden can be reached via the ground floor and offers opportunities for garden parties and special presentations in summer. 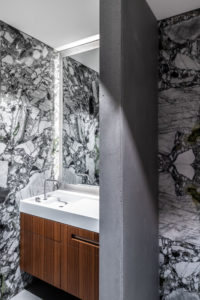 In the entire space, graphically grained wall coverings made of Turkish marble contrast with custom-made maximum-format floor slabs made of concrete. 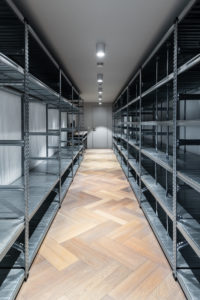 Tucked away on the mezzanine is the warehouse.

HISTORY OF THE BUILDING

ALHAMBRA BERLIN is a place with a moving history. The former film theatre in Berlin, Charlottenburg was built in 1921/1922. Here, the world’s first audio film was released in 1922. In the course of its history, the building underwent various renovations and functions. The building was partially destroyed by aerial bombs during WWII. In 1949 film screenings were initially resumed. Shortly thereafter it was transformed into a hotel with a dance hall in the former film theatre. Later on, it was used as a training center for gastronomy and hotel businesses.

In 2020, the property was completely rebuilt and brought back to life with a six-story annex as an office building and the co-retail space ALHAMBRA BERLIN on the ground floor. Although the building is not a protected monument, the facade of the original building (first floor to the third floor) was reconstructed in its historical form from 1921/22 at the request of the current owner. The owner of the building is the real estate company WERTCONCEPT Investment Group, which specializes in transforming residential and commercial real estate into timeless assets at the intersection of living, office, and retail spaces.